Is your gold coin old or new? Gold coins were minted by the US from 1795 – 1933. Then, 53 years later, in 1986 the American gold eagle was reintroduced as the official gold bullion coin of the United States.

In 1985 congress passed the “Gold Bullion Coin Act of 1985” and the following year, 1986, the American Gold Eagle was available to the public in various gold weights: 1/10 oz, 1/4 oz, 1/2 oz, and 1 oz. It’s been a hit since it’s release among coin collectors and gold investors. It’s also the official gold bullion coin of the United States.

During the Great Depression FDR signed an executive order demanding all gold coins be returned to the US Treasury. They were melted down into gold bar. It was illegal for US citizens to own gold coins until 1974 when President Gerald Ford signed a bill that would legalize American citizens to “hold, sell, or otherwise deal with gold…”.

Pre-1933 gold coins are rare simply because they were illegal to own until 1974. They should have been turned in by their owners and melted into gold bars. This makes them far more valuable than their weight in gold, especially if they’re in good condition. Collectors will pay top dollar for old gold coins in excellent condition.

If you want to know what it’s worth, just check Mavin to see what it’s sold for in the past, and what it’s currently selling for. 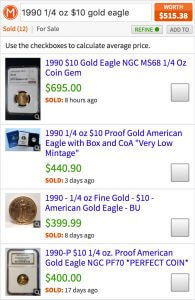 That seems a little high to me so I pick a few comparables that look to be in similar condition as mine and it calculates an estimated worth of $395.33. 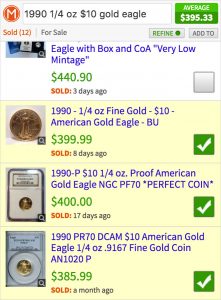 Search for your coin